If you have even a single solar panel working on your homestead, you may be as frustrated as I am by the general image of solar electric generation presented in the mainstream media.

I can’t count how often one hears alternative energy, particularly solar, denigrated. It is almost always referred to as limited, usually because it gets dark every night (none of these people have ever heard of something called a “battery,” apparently) or cloudy. It’s commonly condemned as too expensive, both to the consumer and in the manufacturing process. 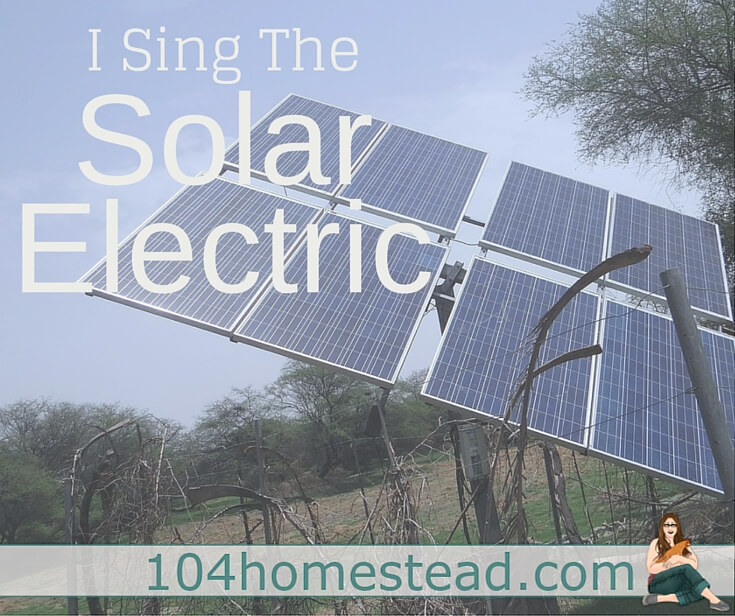 I regard these as damaging stereotypes that ring false to most people who own and use solar arrays.

Because others judge my lifestyle according to these stereotypes, perhaps it’s time to speak out, to talk about what solar can do rather than what solar can’t do. To sing the solar electric.

True, we live in a temperate rain forest. Around the winter solstice, our daylight dwindles to around 6 hours. While the nearest town, Haines, gets less rainfall than many others in Southeast Alaska, and a little less winter daylight than some, I know of successful solar arrays in almost every community in the region.

When people express surprise that anyone would ever consider using solar in rainy, cloudy Southeast Alaska, I point out that Alaska powers its nautical markers with solar panels.

Think about that: ours is a maritime region. Lives and livelihoods depend on a vast system of isolated marker lights—reef markers, channel buoys, harbor entries, lighthouses and more—all of which require constant, unfailingly reliable power to operate. And yet, we trust solar panels to provide that power!

Ironically, I took the time to become a true solar devotee for other reasons than those listed above.

The off-grid property we purchased came with a pair of wind generators. I enjoyed the challenge these machines presented, the dynamic, wild, adventurous method of energy harvest they represented. When the smaller, older generator broke down, we installed a solar array to replace its production. Even so, I kept my focus on the remaining wind generator.

As a result, I experienced nine years of unease, expense, pain, and stress. I won’t tell the whole sordid story here, but I worked hard to maintain and repair that generator and an updated version of it, trading off between the two to maintain power during breakdowns.

One day, while sweating up the generator tower yet again, I glanced down at our solar array, and for the first time truly appreciated its years of reliable, quiet, repair-free power production. A solar powered light bulb lit up in my brain, and I began to look into superseding the wind generator’s power output with solar. 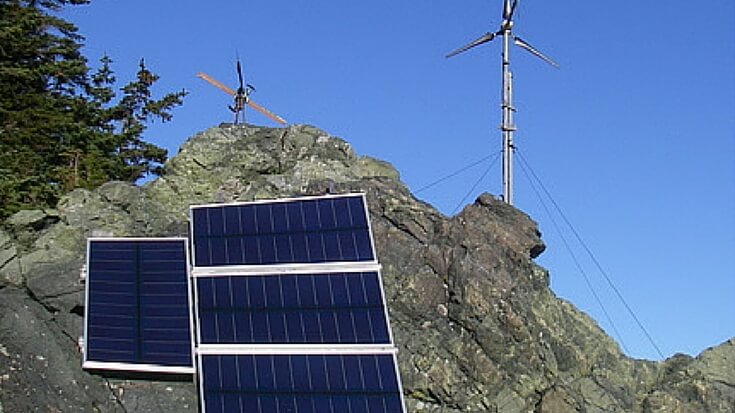 I soon learned that solar technology had not stagnated, nor had it progressed slowly since we installed the first array. Instead, it’s booming! That means vastly expanded choices, impressive leaps in production technology, and, best of all for our needs, greatly reduced prices!

Last summer I installed four 260-watt, 30-volt monocrystalline solar panels. I tied them to our battery bank with a Midnight Solar charge controller. These replaced a bank of four 64-watt composite panels and a small charge controller.

We feel that the resulting power production is phenomenal. The new array harvests solar power at much higher rates in far less favorable sun conditions, including overcast and full shade! We connected the panels at the end of April. Since then, we have not run the wind generator at all.

When we installed the new panels, we planned to replace our eight lead acid 6-volt batteries, which began to show signs of wearing out at the 7-year mark. After less than a week with the new panels and controller, the batteries appear to have “healed”—they hold their charge like a brand new bank!

Further, once we added up the costs, we realized that the new array cost almost $1000 less than the old array had!

The truest test of the system comes in the months ahead, as we lose daylight approaching the winter solstice. We assume that we’ll need the wind generator to augment the solar panels by mid-October or early November through about mid-March next year. However, we may do just fine with the solar panels alone, even through the darkest days of winter.

Growth of the Solar Power Industry

A positive feedback loop appears to be developing currently in the solar power industry. As more people turn to solar energy, more money will become available to invest in improving the product. Prices will continue to lower, research and development will continue to seek out more cost-effective manufacturing methods, more providers will enter the competition for available funds.

Any technological advances will add to the strong base of existing solar panels. While manufacturers cautiously predict about 25 years usefulness, in reality, almost every undamaged solar panel built continues to produce electricity. Most of the panels in my off-grid neighborhood are more than 30 years old now. A small investment could last a lifetime. Our original array, currently stored, can return to use at any time if needed.

Do What Works for You

Of course, these are my experiences and opinions. Your mileage may vary. We calculated our electrical needs, designed an array to match and exceed those needs, and installed it. My point remains: solar power works better than many would have us believe, even in one of the worst weather regions of the United States. 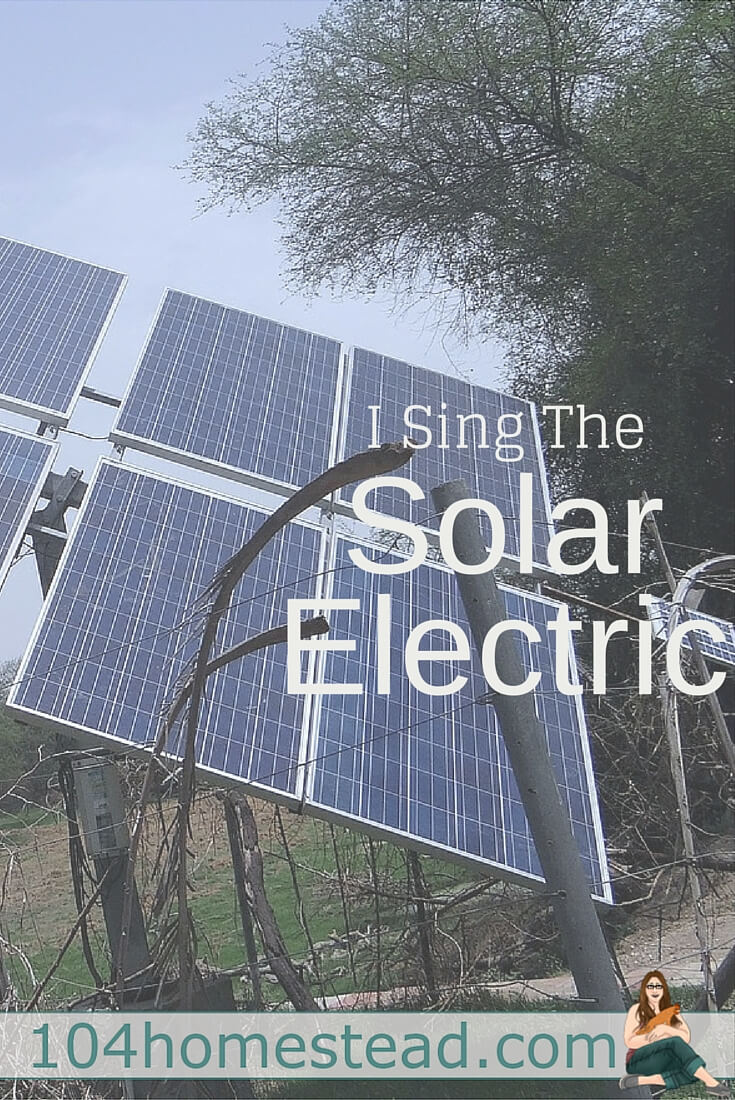 For more self-sufficiency and homesteading tips, subscribe to The Homestead Helper.

Mark and Michelle Zeiger have lived together in Alaska, Mark’s native state, since 1992. With their daughter, Aly, they began pursuing a mostly subsistence lifestyle on their semi-remote, off-the-grid “homestead” on the shore of Lynn Canal, south of Haines in 2006. Mark designs websites, and blogs about his family’s homestead life at AKZeigers.com. He has authored Shy Ghosts Dancing: Dark Tales from Southeast Alaska, and a book about their lifestyle, Sacred Coffee: A “Homesteader’s Paradigm.

Previous Post: « How to Protect Your Backyard Chickens from Predators
Next Post: How to Make Elderberry Syrup for Cold & Flu Season » 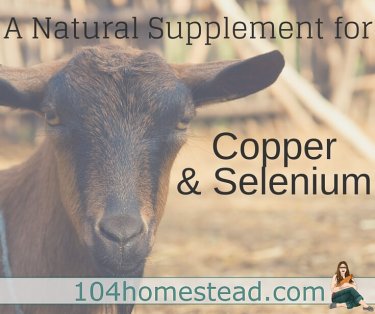