There is a dark spot in homesteading that writers like myself don’t want to tell you about. This lifestyle is amazing and freeing, but it comes with a cost when livestock come into the mix. Death. Most everyone has had a pet in their lives. Your pet may have passed naturally due to old age or maybe it died due to trauma. Maybe you had to put your pet down because it was sick or suffering. Making that decision sucks. Losing an animal sucks. That’s where the darkness of homesteading comes in. Death on the homestead.

We are able to keep our dogs and cats relatively safe. We bring them indoors at night so they are safe from predators. If our pet gets sick, we often can treat them with a trip to the veterinarian. Livestock is a different story. Livestock are exposed to predators day and night. We do what we can, but sometimes sh*t happens that is out of our hands.

If livestock gets sick, it can take over an entire herd or flock almost overnight. Often times a vet visit won’t fix things (not to mention the cost and effort of something like medicating 20 chickens). Homesteaders have to make the call. Often it means starting over.

The Reality of Homesteading

One of my friends recently came home from an evening out to discover that his livestock guardian dog killed his goat-herd. There was no way to prepare for something like that. My friend had to put the dog down, adding insult to emotional injury. Think you won’t bond with your livestock? Think again.

Another friend of mine packaged up her meat birds to bring to the butcher. She knew these animals were being raised to feed her family, yet she treated them with care and respect. Unfortunately she forgot to put air holes in the boxes and the birds had died before she made it to the butchers. She was devastated that they had died in such a horrible way.

I have had to deal with planned and unexpected loss on my own homestead as well. In just the last year, I had two hens die in my arms because they hid their illness/weakness. Chickens don’t let you know they are dying until they literally can’t go on anymore. I sold one of my ducks for meat because we had too many drakes in the flock. I had to euthanize two hens because of illness that I couldn’t afford to have run through my flock. We will be dispatching three more hens in the spring because we cannot afford to feed animals that no longer feed us.

If you don’t own chickens, this may not register with you. You may think “well, it’s just a chicken.” Trust me, even the strongest person cannot be callous when it comes to the death of a living creature, even a chicken. The chickens that will be dispatched in the spring have names and personalities. They are not our pets, but they are cared for and respected. They are living, breathing beings that are part of a flock, a family.

I think people have it set in their minds that if you raise animals for a specific purpose such as eggs, milk, or meat, that magically you disconnect from them. I’m not sure about you, but knowing that my livestock have expiration dates doesn’t change the way I care for them. I sit out there and visit with them, feed them treats, and spend hours watching them play.

Do you know why most homesteaders raise their own produce? Because they want that animal to live the best life possible before it’s time comes. They’ve seen the videos of cattle with no grazing space and chickens who spend their entire lives in wire cages. Animal activists may think raising animals only for it to end in death is horrible, but look at the alternative. The people in the world will never stop eating animal products. Wouldn’t it be better if these animals were being raised by farmers who actually care? 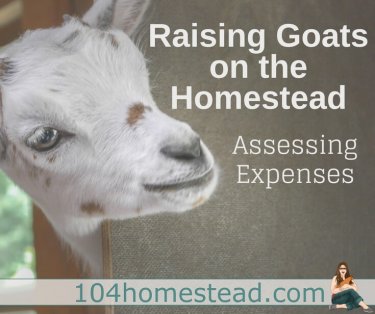 A bit over a year ago, I bought this house. I had

The recipe (and accompanying blog post) are now up

That is frost INSIDE my woodshed. The whole door i

Moving some snow with my #johndeeretractor this mo

He's a wee bit excited about the snow 😆 ❄️